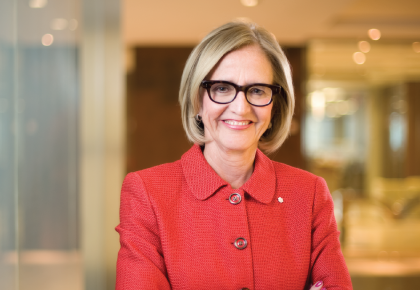 My full interview with Kiki Delaney of Delaney Capital Management originally appeared in my national bestselling book, Market Masters, which is available at Chapters, Indigo, and Coles as well as Costco and Amazon.ca.

I was referred to Kiki Delaney through someone I met after my interview with Gaelen Morphet. “Alex, come meet Robin,” said Gaelen to an employee passing by our interview room at the Empire Life offices. “Alex is one of the brightest stars at the firm.” Alex, a relatively junior employee, glowed at the praise. After all, Gaelen is a senior executive.
Alex is around the same age as me and we found that we shared the same perspective on the market. So, we decided to meet some weeks later for coffee at Aroma Café in downtown Toronto.

Alex was excited to hear about this book. After reading my list of Market Masters to him I asked Alex, “Am I missing anyone?” to which he said, “Yeah,” and offered a couple of names. Upon further research there on my smartphone, one individual he had mentioned resonated with me: Kiki Delaney. How had I missed Catherine “Kiki” Delaney? Her firm, Delaney Capital Management, boasts $2 billion in assets under management, with a track record that spans more than 20 years. So, my next email, which I hammered out as soon as my meeting with Alex ended, was a direct request to Kiki: “Would you like to be featured in Market Masters? It would be an honour to have you be a part of the project.” I was delighted, and grateful to her and to Alex, when Kiki said yes.

In the meeting room for our interview, a statue of a defiant bull stood tall over a defensive bear. That statue was especially appropriate since negative news seemed to be hitting the global markets on a daily basis in the first half of 2015 — Greece, China, Oil, the Fed, and so on. I stared at that statue and thought, “Will the bull be too weak to continue to assert its market dominance? Will the bull market finally succumb to the tail risks?” I would soon get reassurance from Kiki that those factors should not matter, that investors must continually find value in the market regardless of whether the bull or the bear reigns supreme.

An important concept that Kiki conveyed is to invest in relative value. For example, while the broader market, industry, or peer group can be overvalued, a particular stock within any of those domains can still be fairly valued or undervalued. Sometimes, the market and stocks within that market are mutually exclusive, in that returns of the market are not always perfectly correlated with all of its constituents. For instance, today, while the broader market can be down, some of your stocks may in fact be up. And that inverse correlation, among other factors, could be because those stocks were relatively cheaper than the broader market at the time, and did not join the market sell-off. Separately, Kiki shares her opinion on which is the more challenging asset class to manage in a portfolio: equity(stocks) or debt (bonds).

Kiki succeeded early on in an industry that was even more maledominated than it is now. As a young adult, she moved to Toronto, where there were more opportunities, not just for women, but in general in the job market. Kiki got her start at Merrill Lynch before moving to Guardian Capital, where she managed equity and fixed-income portfolios. Prior to founding Delaney Capital Management (DCM), Kiki was a partner, executive vice-president, and portfolio manager at Gluskin Sheff + Associates. Interestingly, Martin Braun, whom I also interviewed, filled Kiki’s role as Canadian equity manager at Gluskin Sheff.

With the success of DCM, Kiki became one of the most powerful women on Bay Street. In addition to DCM, Kiki is chancellor of OCAD University, a member of the board of trustees for the Hospital for Sick Children, chair of the investment and pension committee at the Hospital for Sick Children, and a member of the Leadership Council of the Perimeter Institute for Theoretical Physics. And she was appointed a member of the Order of Canada in 2006. The Governor General of Canada wrote this of her: “After a steady rise through major investment houses, she launched her own investment counselling firm, one of the first women in Canada to do so.” Kiki Delaney is a trailblazer.

1) “Some of the best calls I have made involve avoiding disasters.”

2) “It is easier to pick great companies than to make the macro calls required to manage fixed-income portfolios.”

3) “When we look at a company we compare it to others in the same industry and buy the company that is statistically the cheapest. . . . We want companies that are cheap but also are well managed, have a strong growth profile, have a good product, and where there is the catalyst for change to unlock value.”

4) “If the industry fundamentals are strong and the valuations are appealing, then it makes sense to buy more than one company in the sector.”

5) “We look for catalysts for change . . . a catalyst can be a management change, a new product, an acquisition, or a de-leveraging of the balance sheet.”

6) “The reality is that the Canadian market is two-sided. You have on the one hand resource names, and then on the other hand, you have everything else.”

7) “[On the TSX] there’s also a lot of world-class international companies. Funnily, a lot of them reside in Quebec . . . Quebec companies get positive reinforcement. In many cases, the Caisse de dépôt takes a fairly substantial position in underwriting companies to help them expand through very large acquisitions.”

8) “I think companies should buy their stock back when it is fundamentally cheap. Not every month, or every year. I find it troubling that companies have nothing better to do with their cash.”

9) “[We] invest initially no more than 1% in a small-cap company. If it works, it’s probably really going to work, and it’ll be very beneficial. But if it doesn’t work, it will hurt the portfolio to the extent of its 1% exposure.”

10) “As long as a company continues to represent good value and has decent capital gain potential, we will continue to hold it.”

11) “If you can find a relatively undiscovered theme and marry it with a well-managed and undervalued company, you will probably have a winning combination . . . [for example] companies that make significant and highly accretive acquisitions. This has worked really well in a low-interest environment.”

12) “Declining interest rates are positive. Once interest rates start to go up, they do hit a point where they shut off the economy and that clearly is not good for the stock market.”

13) “You have to read as much as you can. And you have to be as informed as you can be. You don’t want to buy cocktail tips. It doesn’t work.”